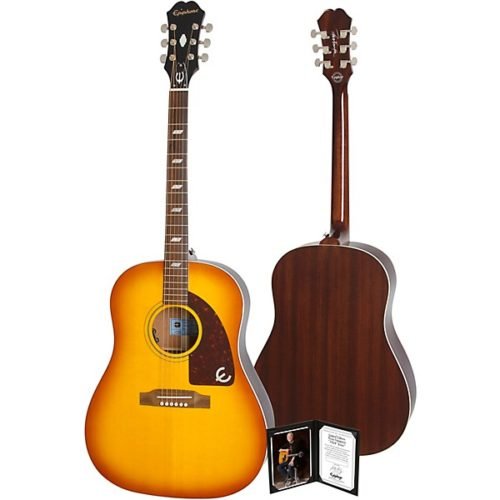 Specced like the vintage guitar the legend plays himself.

To sound like your heroes, it helps to play what they play. With this Epiphone Ltd. Ed. Peter Frampton “1964” Texan acoustic-electric, you’ll “love the way” you sound. Designed with the guitar legend it’s named after, it features a solid spruce top with a rare Faded Vintageburst finish, an L.R. Baggs EAS-VTC pickup system, and the same Schaller M6 machine heads Frampton uses on his vintage Texan. This Ltd. Ed. Peter Frampton “1964” Texan is limited to just 500 guitars.

Frampton purchased his original Texan in 1968 while recording with Humble Pie. “I loved Steve Marriott’s guitar which was an Epiphone Frontier,” recalled Frampton. “I asked our guitar tech if he could find me one like it and he came back with the Texan. And I played it and loved it. Mine was made only 3 months apart from Paul McCartney’s in 1964. He wrote “Yesterday” on his and I wrote “Baby I Love Your Way” on mine.” Frampton’s original 1964 Texan has been his main song writing guitar ever since and has been a constant companion on the road until it was retired in favour of his new Ltd. Ed. “1964” Texan. “I played the prototype on a British TV show and it sounded incredible. I’m so thrilled and honoured.”

To match Frampton’s original 1964 Texan, today’s Ltd. Ed. Peter Frampton “1964” Texan is constructed with a solid mahogany body married with a solid spruce top and beautified by a Faded Vintageburst finish and 3-ply ivory and black binding. The mahogany neck features a 1960s Slim Taper C-profile with a 25.5” scale length, 20 medium jumbo frets, 12” radius, and a pau ferro fingerboard with pearloid “parallelograms” inlays. The traditional sloped dove wing headstock comes with a replica of Frampton’s signature in silver, plus Frampton’s original serial number– “205898″–on the back, along with a “2018 Edition” logo. The 2-way adjustable truss rod has an Epiphone “bullet” shaped cover with a ’60s-era Epiphone “E” logo in white. The pau ferro reverse belly bridge has a bone saddle and white bridge pins with “abalone” dots. The tortoiseshell-style pickguard also has a ’60s-era silver “E” emblem.

Peter Frampton has long been a fan of L. R. Baggs pickup systems. For his Epiphone Ltd. Ed. “1964” Texan, Frampton chose the L. R. Baggs’ cutting-edge  EAS-VTC system, which includes both a soundhole pickup and a Flexible Film Sensor pickup in the saddle. The EAS-VTS system allows the Texan’s incredible dynamic range and true acoustic sound to shine through when plugged in. Unlike typical under saddle acoustic guitar pickups that are dependent on string compression for their tone, the EAS-VTC system was engineered to mirror the soundboard’s actual movement as you play. The L. R. Baggs system includes soundhole-mounted controls for Master volume and tone along with a built-in LF filter. The L. R. Baggs EAS-VTC system is powered by a standard 9-volt battery.

Other appointments on this Ltd. Ed. Peter Frampton “1964” Texan worth noting are the use of the same Schaller M6 machine heads that Frampton uses on his customized vintage ’64 Texan, nickel strap buttons at the neck heel and body and a ’60s-era blue soundhole label with the serial number and original Texan model number: FT-79. You also get an un-signed Certificate of Authenticity. 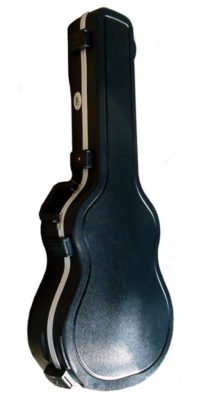